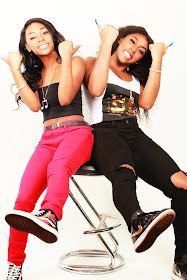 Pretti Emage, pronounced Pretty Image, is an American Hip Hop/R&B duo fresh out of  Clearwater, Florida (aka Wick City). The dynamic duo consists of two sisters, Jaleesah “Mizz Attitude” Riley and Zayah “Baby Girl” Riley . 
Emerging on the scene in 2016 they’ve put on many high energy performances and even sparked major buzz on social media with there smash hit “Turn Up”.  They have satisfied the ears of some of the most discerning music fans. The duo will be releasing their freshman album “The Playlist” in the early part of 2019. Their music, which is a blend of Hip Hop, Pop and R&B is a fresh, flirty, youthful sound that will garner the attention of all music fans. Their music can be streamed and purchased on all digital music retailers and streaming platforms worldwide.